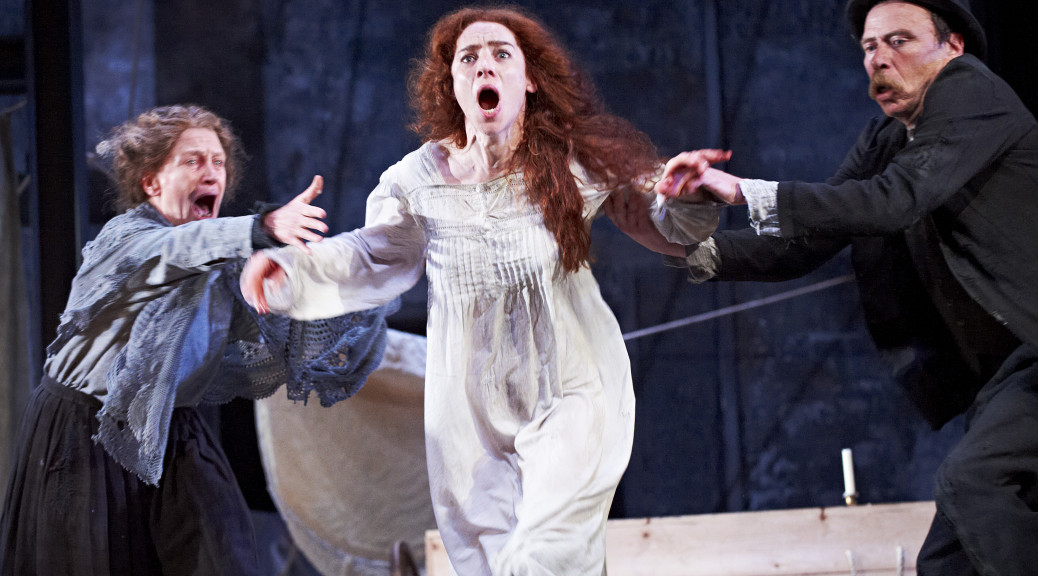 The Plough and the Stars was the fifth play accepted by the Abbey Theatre. It is described as a tragedy in four acts and is dedicated “To the gay laugh of my mother at the gate of the grave.” The first two acts are set during November of 1915, acts two and three during Easter Week 1916. It has a cast of 16.

“Nora voices not only the feeling of Ireland’s women, but the women of the human race. The safety of her brood is the true mark of every woman. A mother does not like her son to be killed – she doesn’t like him even to get married.”

“…O’Casey was conscious of the stark contrast between republican revolutionary rhetoric – heard in the play through the words of Patrick Pearse as they are transmitted through a pub window – and the reality of the new conservative state in the 1920s. In a letter he wrote in the same year he was working on The Plough and the Stars, he was adamant that the creation of the Free State had made little difference to the urban squalor: “It isn’t a question of English or Irish culture with the inanimate patsies of the tenements but a question of life for the few and death for the many. Irish-speaking or English-speaking, they are all what they are; convalescent homes of plague, pestilence or death.”’

The central character of the play is Nora. Nora is married to Jack Clitheroe a bricklayer but they have to share their two-room tenancy with her uncle, Peter a labourer, and cousin The Covey, a fitter. She aspires to a better home for herself and Jack and the baby she is carrying. Her rooms are often invaded by other tenement dwellers; Ginnie Gogan a charwoman and her consumptive daughter Molser, Bessie Burgess a street fruit-vendor and Fluther Good a carpenter. All these characters show the rich humour and resilience and the language of the people O’Casey knew.

In the first two acts Jack is becoming worn down by this married life and finding that he has been promoted to officer in the Irish Citizen Army (ICA) leaves to fight the British against Nora’s pleadings. In the pub the citizens of the working class are excited by the bloodthirsty rhetoric of the Figure in the Window.

The next two acts takes place some months later during the last phase of the failed uprising. The British war-ship, The Helga, starts to bomb Dublin’s North Side. As Jack retreats along the street where they live Nora rushes out to bring him home and to safety. He is forced to push her away in order to leave with a dying comrade causing her to miscarry.

In the final act, set at the top of the house in Bessie’s attic room, Nora has gone mad. Her dead baby lies in a coffin in the arms of Molser who has died of consumption. We learn that Jack has been killed by the falling roof of the General Post Office the ICA were holding. Left alone with Nora as the others are taken off by the British Soldiers Bessie is shot by a sniper as she tries to drag the demented Nora from the window. Ginnie arrives too late for Bessie and takes Nora to lie in the bed left by Molser. Two English Tommies drink the tea Nora has just made as they sit next to the body of Bessie and Dublin blazes.