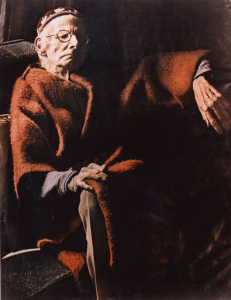 an O’Casey was born on the north side of Dublin in 1880 and lived through troubled and turbulent times; the 1913 Lock-out and Strike, the 1916 Easter Rising, the Anglo-Irish War and the Civil War. Sean O’Casey was involved directly with the Lock-out and Strike, starving with his fellow workers, and like many other Dubliners, he saw and was affected by the horrors of the Rising and the troubles that followed.

When he was forty he wrote three plays within three years depicting the lives of the slum dwellers he was familiar with; Shadow of a Gunman, Juno and the Paycock and The Plough and the Stars. These plays now stand with the great plays of the Twentieth Century.

The most remarkable thing he had ever done, O’Casey later said, was to escape from the slums of Dublin. He managed to do this after his second play, Juno, was performed at the Abbey Theatre in 1924. Only then was he able to give up his job as labourer working on the roads. These three plays made his name and he became known to an international audience.

In 1926 he travelled to London to receive the Hawthornden Prize for Literature and also give publicity for The Plough and the Stars. He decided to stay. During re-casting he met and later married Eileen Carey. They moved to Devon in 1938 with his two sons Breon and Niall: a daughter, Shivaun, was born a year later. Niall tragically died of Leukaemia, aged 21, and Sean O’Casey died eight years later, aged 84.

One thought on “About Sean O’Casey”